Super fun game with a ton of action, we enjoyed making our video XD

Totally rad, reminds me of Spy Hunter a lot. I liked how the first enemy pulled up behind me and ran right into a pair of exploding barrels. The only bummer I feel is that there's no audio at all (that's not just an issue on my side, is it?). If you don't have anybody to do some for you yet, I wouldn't mind supplying some sfx and tunes, actually. But you don't have to take me up on that offer at all, of course. Either way, super neat, great visuals, too!

Thanks for trying it out and the feedback! Spy Hunter and Bump N Jump were what I immediately thought of when I saw the cartridge and felt I had to go in that direction. There should be sound and music. Maybe 'M' got pressed and muted the sound? When I get home I'll check to make sure I didn't accidentally upload some version without audio. Or possibly I uploaded a version that defaults with Mute on. That seems like something I'd do.

Awesome game!   Was really fun to play, fascinated three guys. Even watching each other. :) Nice graphic, goes a little bit too wild later on. :D Your game motivates to play for a long time.
GG! 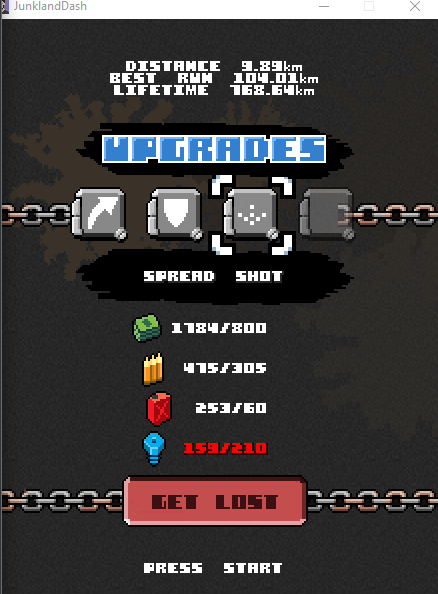 I found a bug where the game won't ricochet you back into the center and just keeps you stuck on the side. ! Wait, nevermind, that's just rng! Either way, insanely fun game. I'm trying to figure out the stuck bug but it seems like it's just random when you have velocity from another turn into the wall.

I stumbled upon the wall stick bug right after I had posted that last build. Should be resolved in the 1.1 build (at least I haven't been able to get stuck in about 100+ play tests). Thanks for trying it out!

Not bad at all. Very addicting. I had issues at first thinking I was using the gas and ammo I was collecting but they're basically currency. A tiny bit of improvement is needed but overall, I really like this.

I went back and forth on the consumables and they kind of were left on the editing room floor when trying to get something built to post for the original deadline. In the latest upload, ammo and fuel are both consumable now. Thanks for trying it out and the feedback!

This game is amazing. You accomplished so much in so little time for this gamejam. I would only suggest to create a How to Play screen when possible. Maybe adjusting the difficulty ramp of the helicopter would be cool to, it already starts too powerful. But these are all minor adjustments.

We had fun, thank you for this awesome project!

Thanks for the kind words and giving it a play. Yeah the difficulty ramp was completely rubbish - no ramp, purely RNG. The original build was me just trying to get something to post before the deadline. The new build is based on progression and the helicopter shouldn't show up before 2km now (though I just finished a play test that had him appear at 1.73 -sigh). A "How to Play" screen is still on my to-do list. It should be so easy to knock out, but then again it never usually works that way.

the graphical quality is very impressive, i like how much detail there is. gameplay felt somewhat unresponsive however, and there were some conveyance issues (are bullets used for shooting or just upgrades? am i actually hitting the helicopter? etc)

Thanks for the feedback. Yeah, the gameplay loop is definitely lacking still. I'm working on improving that!

As far as parts/currency - they are currently just used for upgrades. I was trying to think of items that would be considered valuable and those were the first 3 I thought of. Though I just had the thought of "water" as I was typing this. I considered having ammo as an consumable but decided against it - can't entirely think of why at this moment.

The conveyance issues are always tricky, especially as I keep adding more "flair" to what's going on - some of it intentionally to distract. As far as the hits landing, there should be a "hit splash" as well as a sound effect. I'll see if I can work on the visibility/readability of the hit splash. But in answer to the question, yes you are hitting the helicopter. I think what hurts is you aren't really supposed to be encountering them in the early (weak) state. The helicopter has 25 HP and the starting bullets only deal 1 point of damage initially. Once you increase that damage and add things like "rapid fire" or "double shot" the choppers go down really easily. This in turn helps in conveying they're being hit! Otherwise it just feels like you're hopelessly spamming bullets to no end.

Sorry for the long reply. Thanks for giving it a play! Since they've recently extended the submission deadline a week, I plan to really work on the game loop and hope to have something a little more memorable by the end.

i highly recommend having an entity briefly flash when it's shot - that's the easiest way i've found to ensure the player understands if what they're doing is working.

Yeah, after I typed my reply I had that realization. It's as if I forgot how to video game. I added a flash and on the red cars there is a chance for the car to "shimmy' which resets the AI ( i.e. The gunman goes back in the window). Haven't uploaded any of the changes yet. Had a few bugs (like shields not working as intended and getting stuck in the walls) that I also fixed. Have a couple more small changes to make and will hopefully  release another public build tomorrow.  Thanks again for the feedback!

Yes! The visuals are great but I die to fast here

Thanks for trying it out. I'm still trying to find a good balance for the difficulty curve. You are meant to die - just need to find the right speed and amount of deaths.